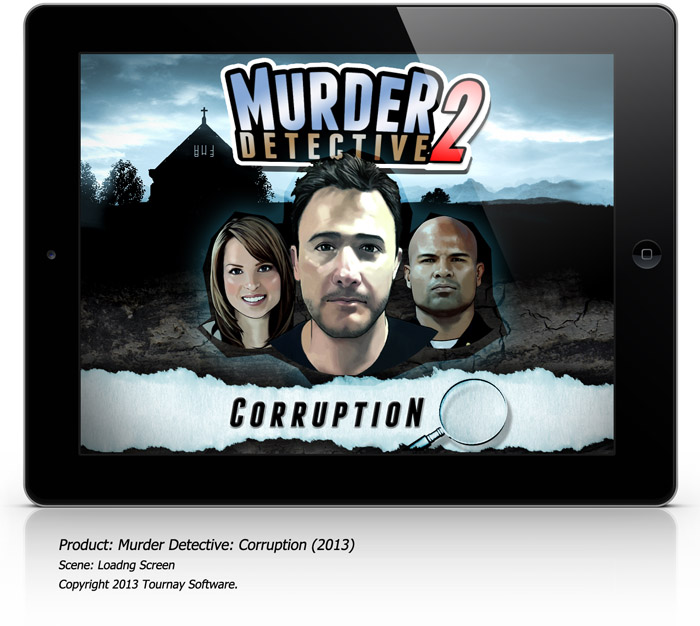 As the title suggests, Murder Detective 2: Corruption is the second in a series of adventure games developed for Sydney-based Tournay Software.  The game was developed primarily for Apple and Android devices, but other derivatives may follow.  The first product was more of an e-book, the user was presented with the story and a series of location backgrounds.  In the new game however, the player is required to spot clues and work through a series of mini-games in order to catch the killer.  It was actually a complex game to work on from the art perspective. 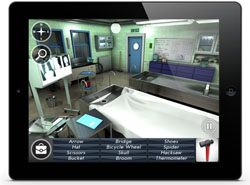 I organised the production of MD2 from initial discussions with the client, through to scheduling, budgeting and contract.  I provided the majority of artwork and also some of the audio (some ambient sounds and effects).  The story and game design was provided to us by the client.  Coding was undertaken by my co-Pocketeer Mat Hopwood using our new rapid development system, ‘AppEasy’.

The above image is taken from the intro loading screen for the product.  It’s 90% PhotoShop work.  The church and some of the treeline is derived from game geometry.  But, it wasn’t rendered – it’s actually a viewport clipping taken from the working scene while I was working.  The raw sillouette image just ‘appeared’ – so I decided to grab it for use later.  And, it ended up here!

This is actually one of several loader variations.  One of the downsides to developing for Apple and Android is the screen dimensions and aspects vary quite a lot across devices.  Some are wide, some are tall – we have versions for each.